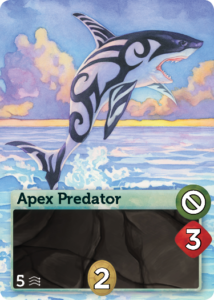 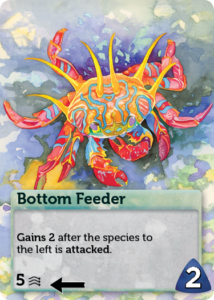 BOTTOM FEEDER (Left & Right)
For each Bottom Feeder trait on your species:
– Your species will gain 2 population after the species to its
immediate right or left (depending on the direction of the
arrow) is attacked. 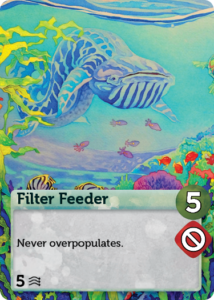 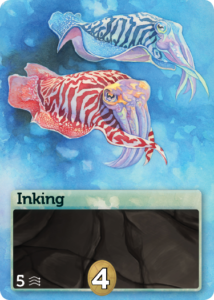 INKING
For each Inking trait on your species:
– Other species take 4 fewer population than their attack value
when they attack your species.
Note: Don’t forget that Shell icons do not reduce the attack value,
so traits like Shark Cleaner are not affected by Shell icons. 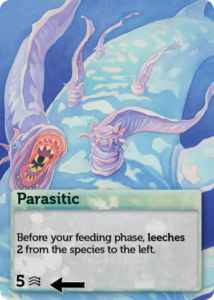 PARASITIC (Left or Right)
For each Parasitic trait on your species:
– Your species takes 2 population from the species to its immediate right or
left (depending on the direction of the arrow) before your feeding phase. If
that species does not have enough population, take as many as possible.
The leeching automatically triggers after your play cards phase, and before
your feeding phase. If you have more than 1 Parasitic trait, choose the order
in which to trigger them. Leeching does not count as a feeding, so you may
choose to feed the Parasitic species during your feeding phase in addition to
the leeching, or you may choose to feed a different species. 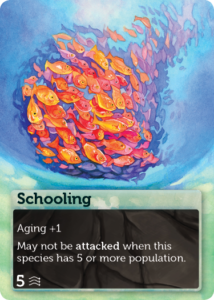 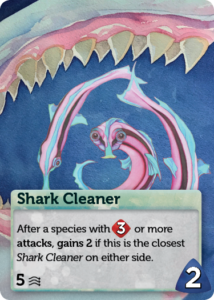 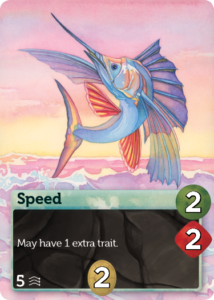 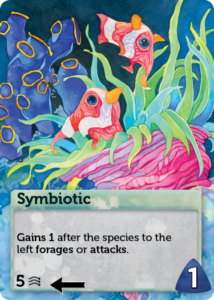 SYMBIOTIC (Left & Right)
For each Symbiotic trait on your species:
– Your species will gain 1 population after the species to its immediate right
or left (depending on the direction of the arrow) forages or attacks. 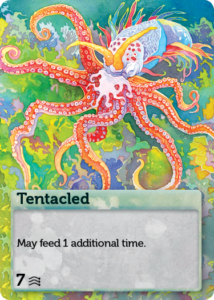 TENTACLED
For each Tentacled trait on your species:
– If this is the species you choose to feed during your feeding phase (attack
or forage), then it may feed an additional time (attack or forage).
Resolve all triggered traits from the feeding, then overpopulation, before
starting an additional feeding. Additional feedings trigger traits as normal.
A species with Tentacled may not feed an additional time if it loses population
to overpopulation. Overpopulation on a different species (e.g., a species with
Bottom Feeding or Shark Cleaner) does not end this species feeding. 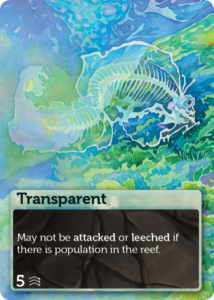 TRANSPARENT
A species with Transparent may not be attacked or leeched if the Reef has at
least 1 population in it. 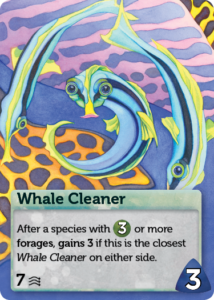 ADVANCED EYES
Ignores 1 defensive trait when attacking a species with a Deep trait. 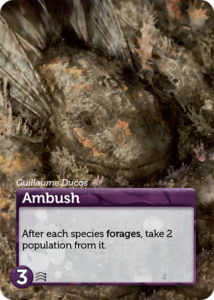 AMBUSH
After each species forages, take 2 population from it.

BIOTIC CYCLE REVERSAL
Gains 3 after an attack reduces this species to 0 population. 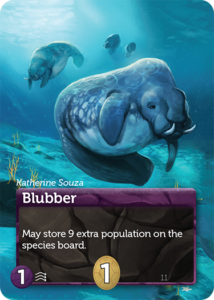 BLUBBER
May store 9 extra population on the species board.

BRIGHT COLORATION
Gains 1 after a new species is created.

CAMOUFLAGE
[Defense +2] for each other species you have.

● If the species with Camouflage is your only species, Camouflage provides [Defense 0]. Camouflage still counts as a defensive trait even if it’s not providing any [Defense].
● The [Defense] provided by Camouflage is continually updated as you get or lose species, even if you happen to get or lose a species during a feeding turn.

COMMUNICATION
May have 1 extra trait. All gains are doubled.

DEFENSIVE SPINES
Species lose 4 population to the Reef after attacking or leeching from this species.

EXTREMOPHILE
May have 1 extra trait. May not be leeched. Never overpopulates. Never goes extinct.

FILTER FEEDER
Never overpopulates. May store 5 extra population on the species board.

GENTLE GIANT
May not be attacked. May store 5 extra population on the species board.

GEOTHITE EXOSKELETON
May have 1 extra trait. Can’t be attacked by a species with less than [attack value 9].

● Goethite Exoskeleton doesn’t reduce the amount of population taken by an attacker. If an
attacker has [Attack 9], it still takes 9 population.

GRAZER
Before your feeding phase, takes 2 population from the Reef.

LEVIATHAN
Aging +1. May not be attacked.

LUMINOUS BACTERIA
May have 1 extra trait. May forage from any Ocean zone.

NEUROTOXIN
Species lose 2 population to the Reef after they attack or are attacked by this species.

● Even though it affects attacks, Neurotoxin doesn’t have a black text box, and it isn’t a defensive trait. It can’t be ignored by effects that ignore defensive traits.
● Neurotoxin doesn’t affect how much population a species takes in an attack. A species can still attack a species with Neurotoxin, even if all the population it takes would be lost to the Reef.
● The losses caused by Neurotoxin are considered to be “due to an attack” for traits that care about that.
● The Neurotoxin trigger is owned by the player who owns the species with Neurotoxin, regardless of whether their species is attacking or being attacked. It resolves in their place in the turn order.

● A species automatically gets [Attack 1] if its [Attack] would be less than 1. If a species has
Swarming, no other traits with [Attack], and 0 population, its [Attack] is still increased to 1.

WARM BLOODED
May have 1 extra trait. May age an additional 1-3 population.

● The aging ability of Warm-Blooded is optional. The species with Warm-Blooded still has to age at least its usual amount of population.

Gains 1 when each Shark Cleaner triggers.

Gains 1 when each Bottom Feeder triggers.

Gains 2 after an adjacent species (Left and Right) loses population due to an attack.

After a species with [Attack 5] or more attacks, takes 2 population from that species.

After Whale Cleaners gain, takes 1 population from each of them.

May have 1 extra trait.
Gains 1 after losing population due to an attack.

Gains 1 after a species loses 2 or more population due to an attack. 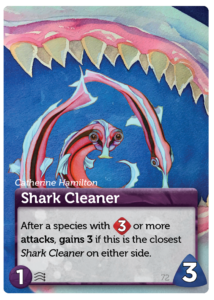 After a species with [Attack 3] or more attacks, gains 3 if this is the closest Shark Cleaner on either side.

[Attack 13]
Ignores “may not be attacked” effects on species with at least [Forage 5] or [Attack 5]. May attack 2 additional times.